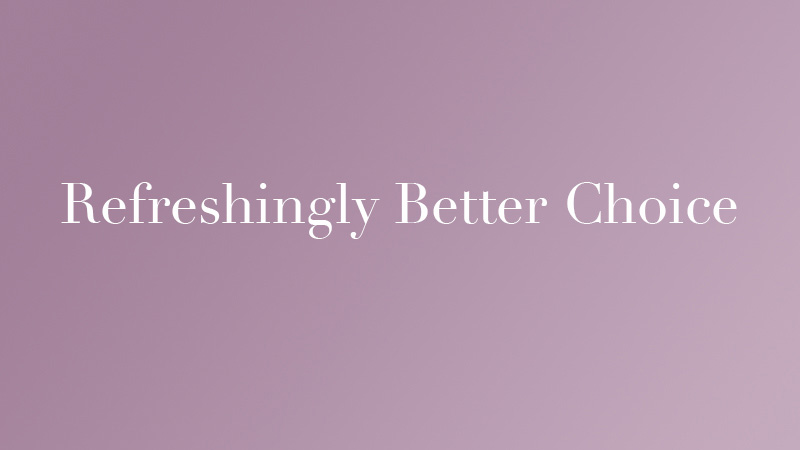 This case study is based on a genuine brief. The CEO of an FMCG beverages company prepared a three-year plan for the business. He also came up with the title/theme for this mid-term plan himself; Refreshingly Better Choice. 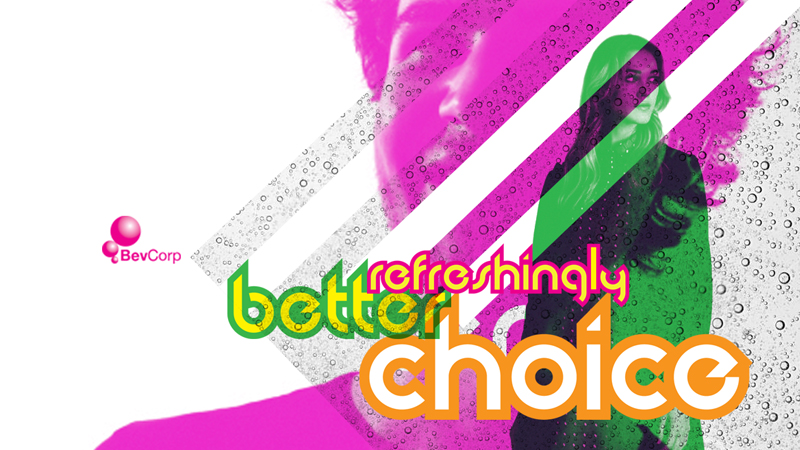 The primary psychological driver in this case-study is the mere-exposure effect – a mundane name for a seemingly obvious phenomenon. This effect posits the more we are exposed to a stimulus, the more favourably disposed we are towards this stimulus.

In order to maximise this effect we also need to provide a recognisable set of visual assets to augment the business plan theme. 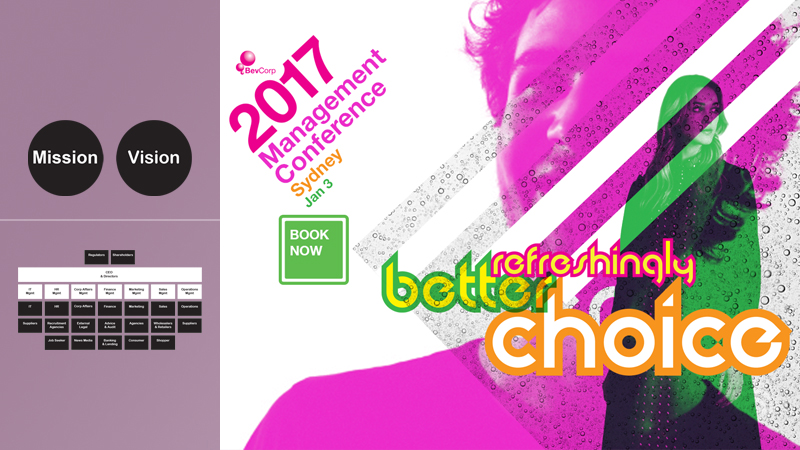 The first point of dissemination for a CEO’s plan is usually a corporate event outlining the strategy. In this case it was for the business’ top 100 executives.

The event would be broken up into three main components… 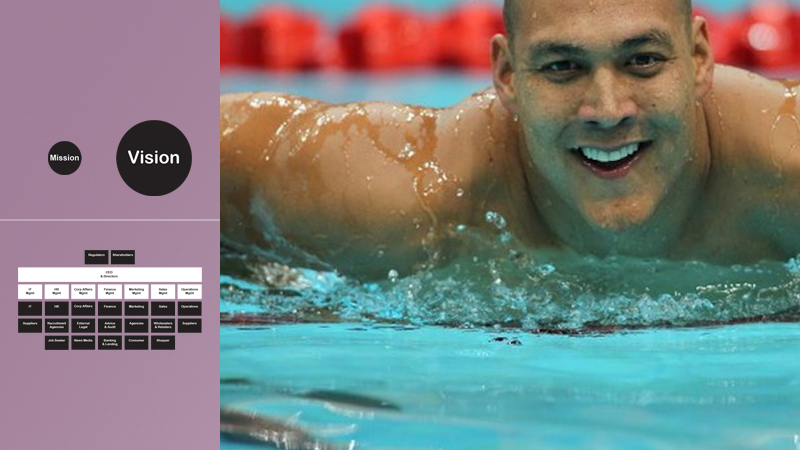 The first component of the event focuses on Refreshing.

Engage a speaker who has demonstrated the capacity to refresh their career, for example Geoff Huegill discussing his successful re-entry into competitive swimming. Ideally this session will have no direct reference to the CEO’s program, but will provide a refreshing entree to the day and set the underlying theme. 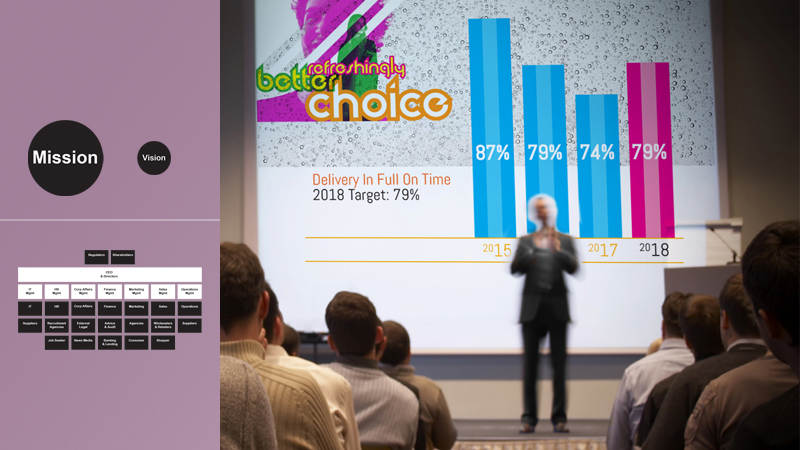 For the Better component, a plenary session in which the CEO lays out their plan.

The truth about the business at the time of briefing is that it was lagging behind its competitors in key performance indicators, so its best not to avoid the hard truths during this session. The deficient KPIs are acknowledged, and the strategy to reverse the decline outlined. 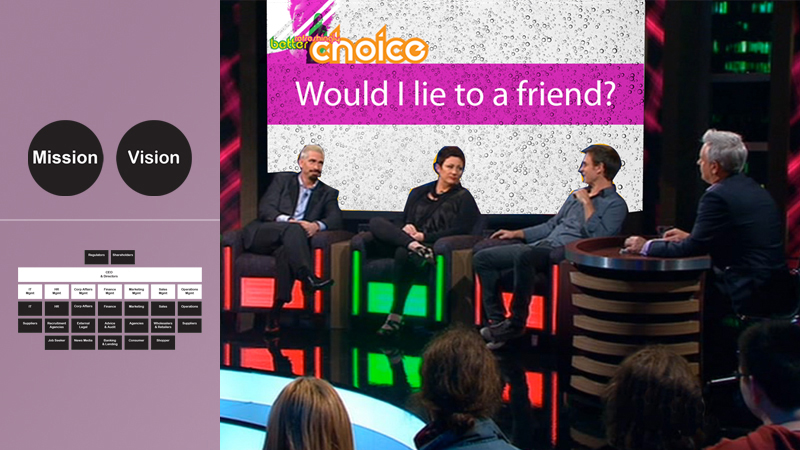 Choice is presented as a game show format.

The CEO is joined on stage by a small number of members chosen from the audience. Use the guest speaker to present a series of dilemmas to the panel. The dilemmas would be generated from specific business issues identified by the CEO in the previous session, as well as more general ones taken from life.

The first few questions would be seeded in order to let the CEO break the ice, and the spirit of the exercise should then be met by the other members of the panel. 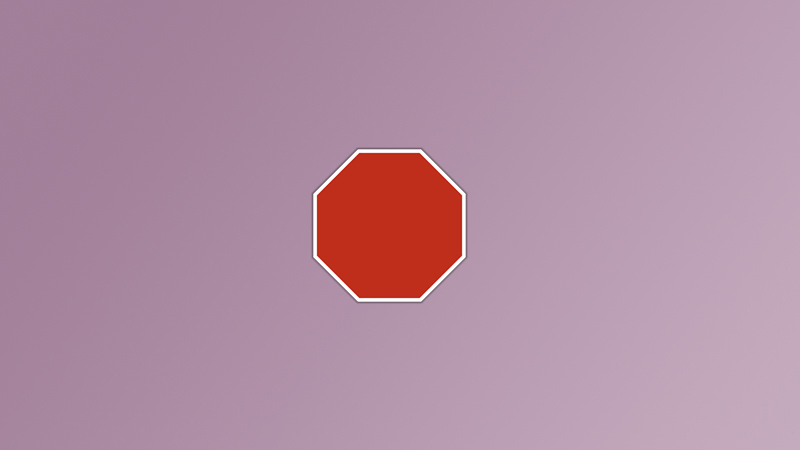 And that event is where things usually stop.

Maybe a follow-up email to attendees gauging satisfaction ratings around the event, but little else specific to the chosen theme over the duration of the program.

There are, however, a number of touchpoints within the corporate comms continuum which can be leveraged to maximise the mere-exposure effect to the benefit of the plan. 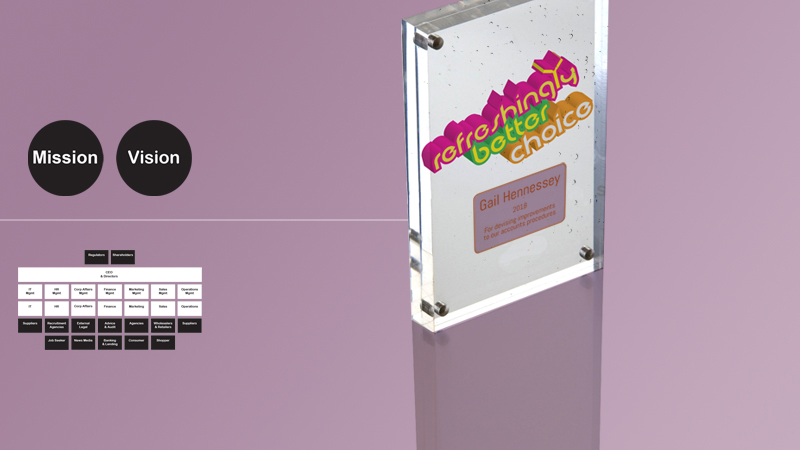 HR is perhaps the most mature silo when it comes to leveraging psychology.

From standards such as the Wechsler tests, the Five-Factor Model of Personality and Emotional Intelligence, through to exotics such as DiSC, BIT’s Applied and Optimice’s hub mapping, whatever the modelling used allows us a platform upon which we can build a targeted approach for any brief. 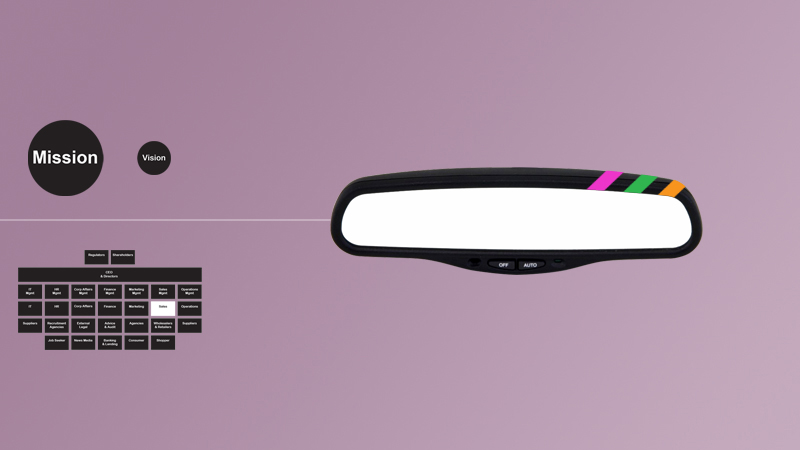 Psychology can be more broadly leveraged for efficacy or productivity.

The cognitive behavioural approach, for example, might be applicable for a program designed to improve driving behaviours of the sales force. I outline such a program here.

Psychology can also play a direct role in the application of sales programs.

In this case, Choice is a particularly good opportunity. Use elements of the theme to craft specific sales initiatives and templates. For example, a tutorial can be provided based on the psychological concepts of ‘choice architecture’ or ‘framing’, with templates prepared for in-market use.

Some of these concepts will already be familiar to the sales person – favourable shelf placement of specific SKUs being the most obvious example. The tutorial could be regarded as a refresher on the subject, a different way of looking at it or a new learning opportunity. 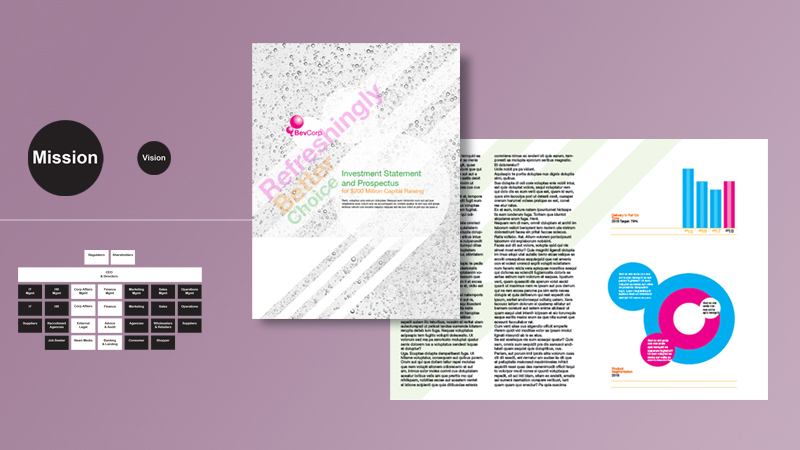 The mere-exposure effect can also be leveraged where it might not be initially evident.

Take a capital raising prospectus for example. It sits in counterpoint to a newsletter – the higher up you communicate, the less the reader is interested in anything but the numbers. 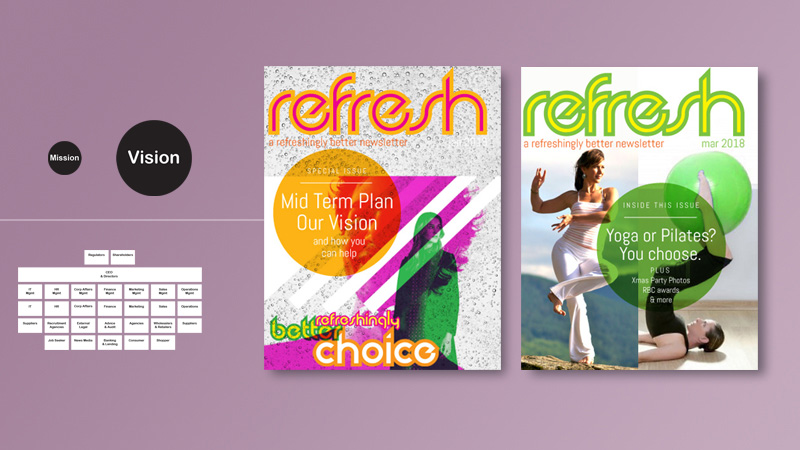 In-house magazines are an excellent way of sharing the message.

Though they seem largely redundant these days, in-house magazines can be a tangible and constant reminder of the CEO’s plan in this age of digital everything. Initially to help the employee or stakeholder understand the detail of the plan, and over time as a more tacit reminder of the plan by echoing key words and visual assets. 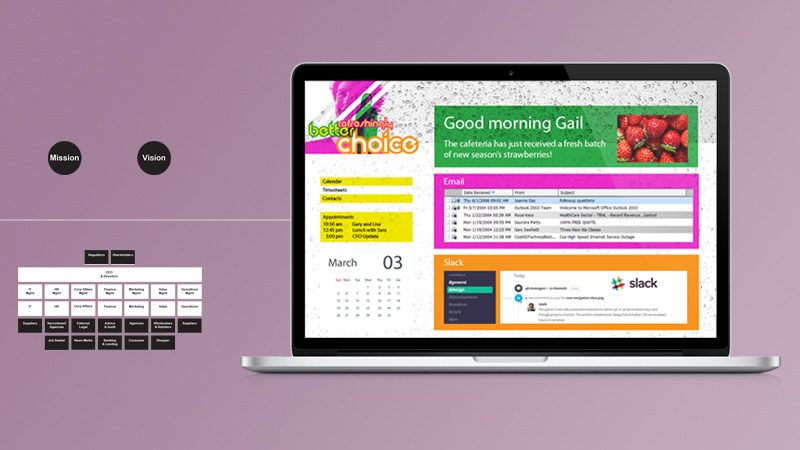 For the most part, however, the CEO’s program will be invisible to the majority of employees.

Including the logo on the homepage could serve as a daily reminder, but it’s not necessary to emblazon it across every page of work.

It’s important to find the right balance for mere-exposure, and not tip things into over-saturation. 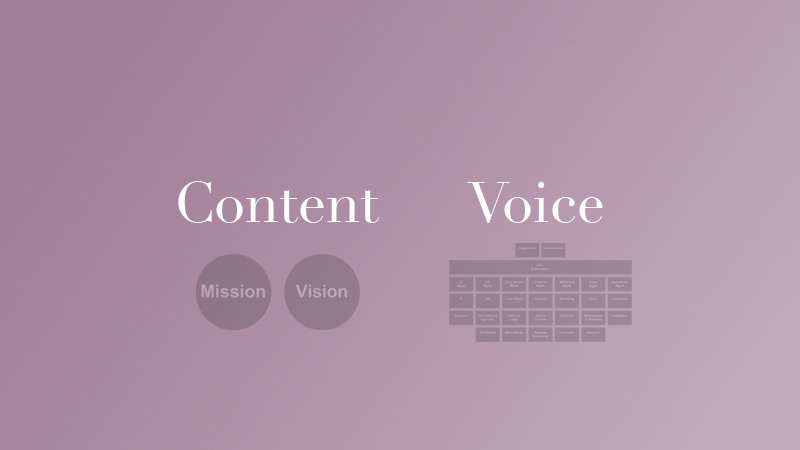 You might have noticed a set of graphics to the left of each frame. This is a basic system which breaks down the communication to its key criteria – Content and Voice. 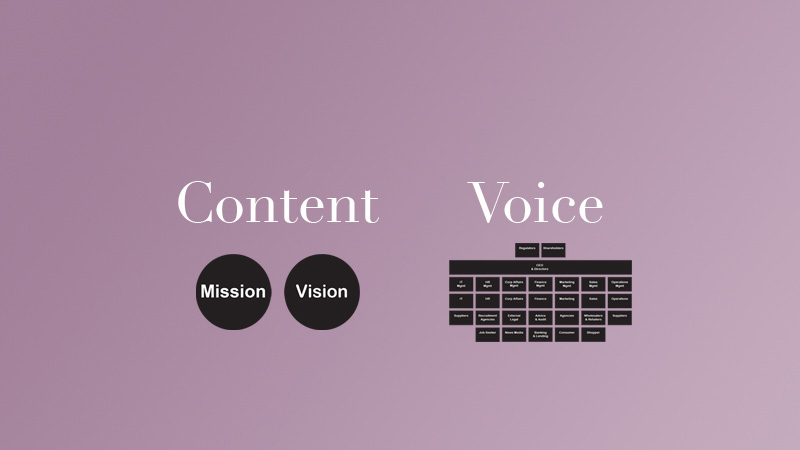 Content concerns itself with the substance of the communication.

Voice concerns itself with the tone and specifics of the language used. 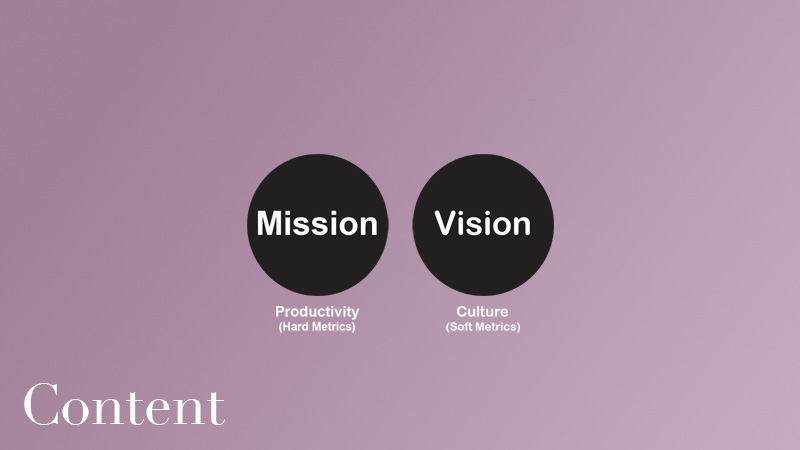 Ideally, all communications will feature both dimensions, albeit at differing levels depending on requirements. 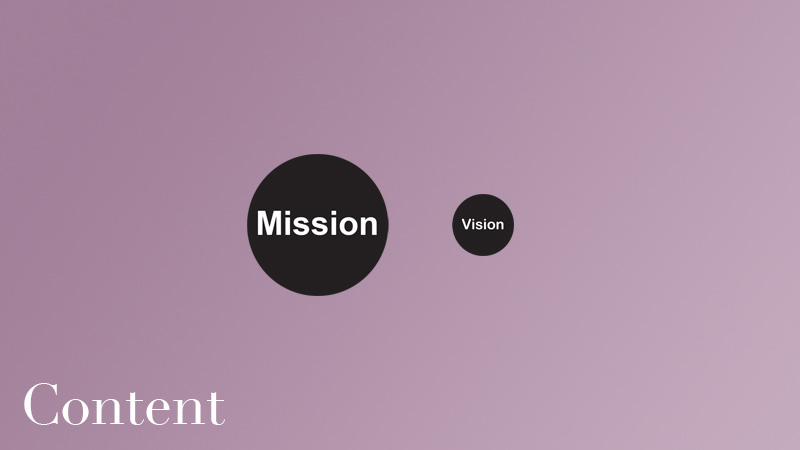 For example, a set of procedural guidelines will have an focus on productivity, or Mission. They will necessarily be concerned with operational and compliance directives, and the primary aim is to ensure these are understood and carried through.

However, this set of guidelines can also project aspects of the business’ culture. There should be far less emphasis on the Vision in these guidelines, but including it in some form aids the narrative and helps warm up what can be overly cold. 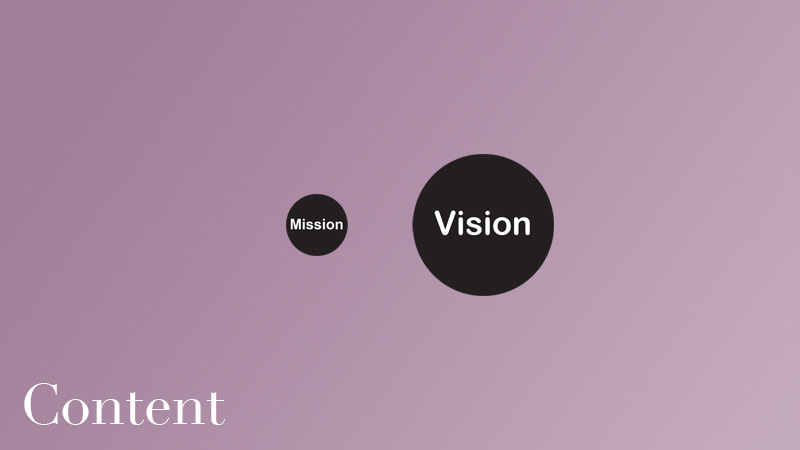 In contrast, an email invitation to a Christmas party should have more emphasis on the Vision, communicating the cultural facet of the business.

It will still, however, have an aspect of Mission in that it will need to communicate location, date and possibly even RSVP. 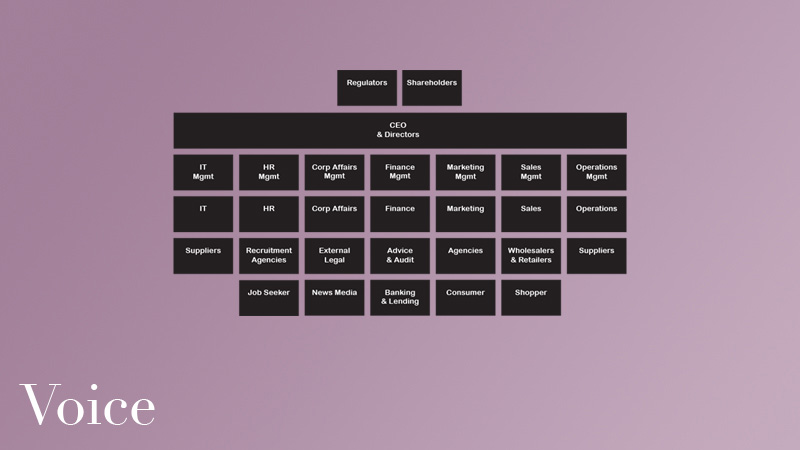 Voice goes to the language used for any communication.

The above diagram presents a very basic breakdown of the internal and stakeholder audience for a corporate entity. 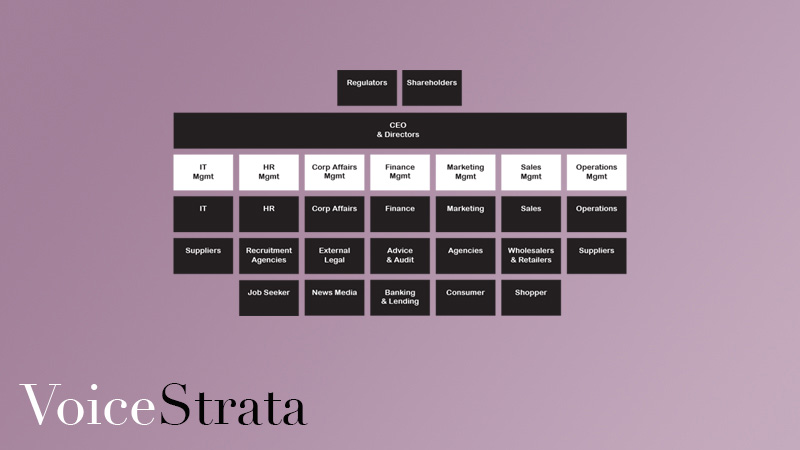 Strata defines the use of language.

In the above example, management across a business will be privy to broader yet more sophisticated business concepts. Strata also helps determine the level of detail and confidentiality of the communication; be it within a certain level of management, within the whole business or across all stakeholders. 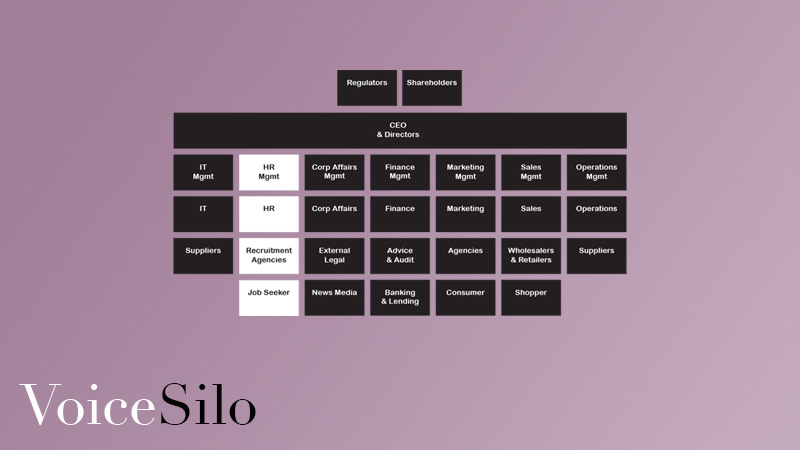 For example, the Voice for any communication within a silo can assume an understanding of business concepts specific to that silo; the most obvious example being the use of acronyms. 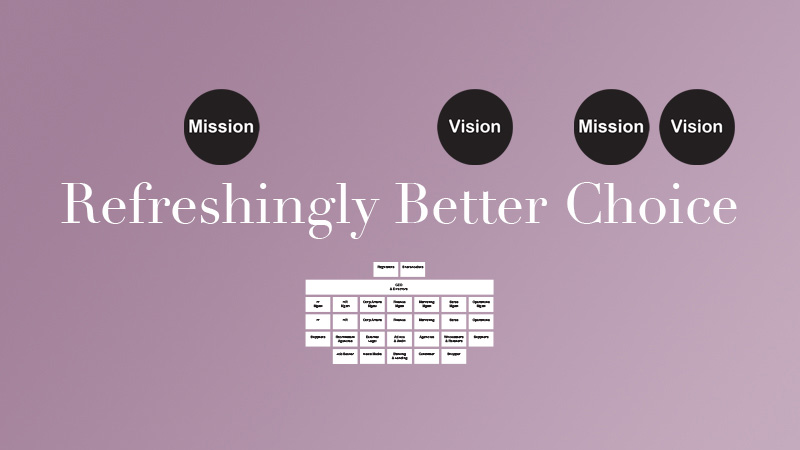 To the experienced comms practitioner, this system will come across as self-evident.

But I have found it helpful in provide guidance for those to whom it is not so obvious – a manufacturing executive who might not appreciate the added persuasive value the cultural component would bring; or a graphic designer overly focused on the aesthetic at the expense of productivity.

From a macro perspective, it can be applied to any organisational grid to help map out the many communications within a complex multi-touchpoint brief.